Swan Upping on the Thames this week! 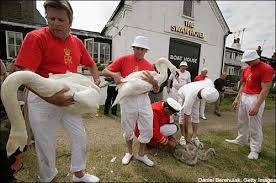 Swan Upping is the annual census of the swan population on stretches of the Thames in the counties of Middlesex, Surrey, Buckinghamshire, Berkshire and Oxfordshire.

This historic ceremony dates from the twelfth century, when the Crown claimed ownership of all mute swans.
At that time swans were regarded as a delicious dish at banquets and feasts.

Today, the Crown retains the right to ownership of all unmarked mute swans in open water, but The Queen only exercises her ownership on certain stretches of the Thames and its surrounding tributaries.

When a brood of cygnets is sighted, a cry of "All up!" is given to signal that the boats should get into position. On passing Windsor Castle, the rowers stand to attention in their boat with oars raised and salute "Her Majesty The Queen, Seigneur of the Swans".

The cygnets are weighed and measured to obtain estimates of growth rates and the birds are examined for any sign of injury (commonly caused by fishing hooks and line).

The swans are also given a health check and ringed with individual identification numbers by The Queen's Swan Warden, a Professor of Ornithology at the University of Oxford's Department of Zoology. The swans are then set free again.

The observation points and times are as follows (all times given are approximate):

If you want to see the swan upping from your own boat Boatshed Thames can help you find the right one http://www.boatshedthames.com